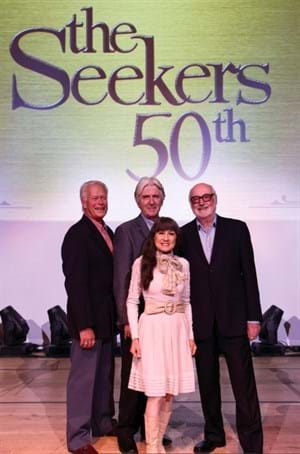 As part of their 50th Anniversary celebrations, The Seekers have once again shared their music live in concert with their millions of fans in Australia and throughout the United Kingdom – and now, with their legion of fans in New Zealand.

In 2013, Judith, Athol, Keith and Bruce have reunited for ‘The Golden Jubilee Tour’. Together, they have taken their fans down memory lane with stories, memorabilia, messages of congratulations from music industry contemporaries, and video clips on the big screen.

As the centrepiece of their two-hour performances, the legendary group who put Australia on the international pop music map, have raised roves with their chart-topping hits “I’ll Never Find Another You”, “A World Of Our Own”, “The Carnival Is Over”, “Morningtown Ride”, “Georgy Girl”, “I Am Australian”, and many unforgettable crowd favourites.

All those fabulous melodies and timeless lyrics have created magic in many of the world’s most magnificent concert venues.